A Charitable Group Dedicated to Benefitting Their Community 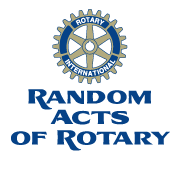 Since 1956 East Fresno Rotary has been active in service projects to improve the community of Fresno and the surrounding areas.  These projects have ranged from smaller jobs, like ringing bells for kettle collections for the Salvation Army, to major undertakings, such as the renovation of the historic Ranch House at the San Joaquin River Parkway.  Over the years the club has done everything from installing irrigation systems to renovating castles (King Arthur’s Castle at Rotary Storyland).  Volunteering for “hands on” tasks is an expected aspect of being a Proud East Fresno Rotarian. The club not only supports these endeavors financially, but also utilizing the members “sweat equity” and individual skills.

In 2012 East Fresno Rotary rebranded all of the club’s participatory service projects as “Random Acts of Rotary”.  It was in that Rotary year the club decided to take on 12 separate acts, one hands on project a month, to demonstrate how important is was for the club to not only support the community financially, but with its service to community.  East Fresno Rotary continues to donate to causes through the club’s Foundation, but it was equally significant to be out in the community showing support through individual member’s hard work and the donation of their time.

The 2012 year began with a painting project at Rotary Playland followed by filling school backpacks for Boys & Girls Club and then cooking lunch for the residents at Masten Towers.  The second quarter saw the club treat 20 kids from Boys & Girls club to a tailgate and their first Fresno State football game with the following month’s project being painting a “rewards room” at Scandinavian Middle School and then a can food drive for the Community Food Bank and a toiletries drive for the Marjaree Mason Center.  Those endeavors were followed by social events for our exchange student from Taiwan, a blood drive and then selling Kid’s Day papers.  The year ended with painting at San Joaquin River Parkway, scholarship interviews and finally cooking for both the boys and girls camp for Camp Royal at Sequoia Lake.  At the end of the year, 79 of 85 members participated in Random Acts of Rotary and the club totaled over 537 hours of service.  It was deemed an extremely successful year of service for East Fresno Rotary.

Random Acts of Rotary at East Fresno Rotary continues the tradition of service in the Fresno community since 1956.  Each year the club’s board decides which activities to take on, with fresh projects brought forth every year.  While some traditions continue, like the school backpacks for the Boys & Girls Club, which has been going on since 2002, the club likes to take on new jobs that new members may present to the club.  Whatever and however these “hands on” projects are produced, Random Acts of Rotary will continue to enrich the Fresno community.